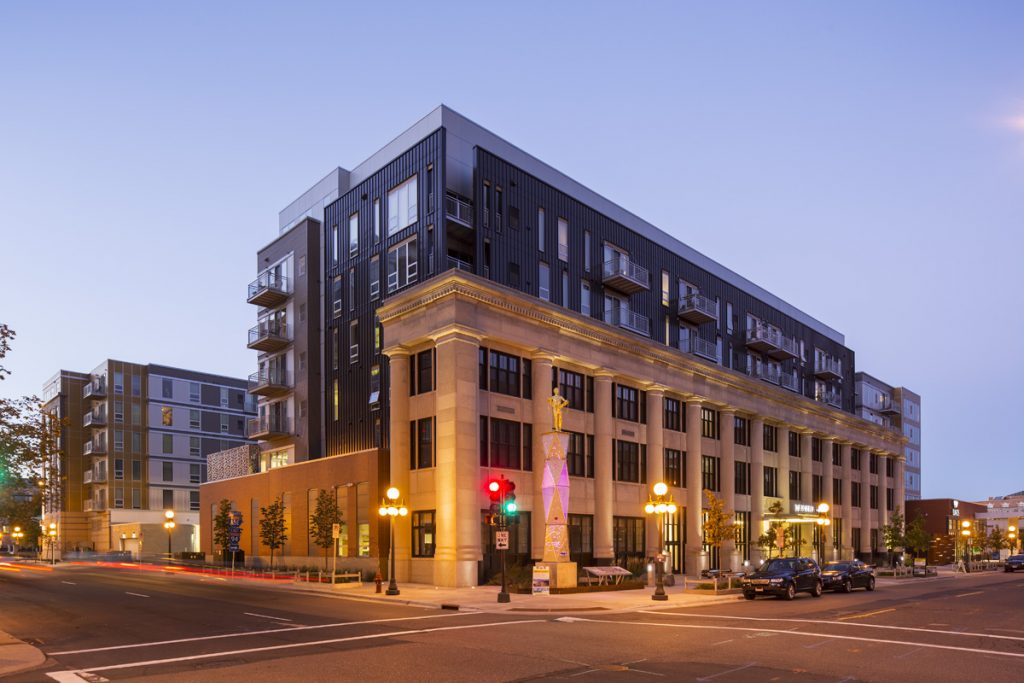 The Penfield was envisioned as a transformational mixed-use project that would preserve the primary façade of the existing historic Saint Paul Public Safety Building, resulting in an underutilized block and stalled development becoming a success story by generating financial profit through a strong, collaborative effort between BKV Group and the City of Saint Paul, Minnesota.

In revitalizing a blighted city block into a 406,000-square-foot, LEED Certified Silver® full-block development featuring a 30,000-square-foot grocery and 254 market-rate apartment units, the project marked the city’s first downtown, market-rate development in 20 years. Offering both modern housing options and much-needed community amenities, construction took 18 months with The Penfield opening in February 2018. The building quickly filled with residents and was immediately well-received by the surrounding community (in addition to selling for an $8.7 million profit).

What did it take to create such a successful project?

The explanation is five-fold:

Challenges of Preserving the Historic Facade

The existing public safety building completed in the early 1930’s was designed by Clarence “Cap” Wigginton, a prominent African American architect. Architectural historical consultants, Hess-Roice, were incorporated as part of the team to study and determine the best way to utilize the existing building. After extensive study, it was determined by multiple stakeholders that the primary façade should be preserved and integrated into the new building. Approximately 230 linear feet of this façade at 40’ tall was carefully separated from the rest of the existing building before it was demolished. An additional engineering consultant, Wenzel Engineering, Inc., was brought on to the team to help determine a strategy to hold the structure in place while construction occurred around it. New steel columns were placed on the inside of the structure, while temporary steel columns placed on the exterior helped create a “skeleton” to hold the building in place. The stone sections were then wrapped in plywood and protective layering, and then stripped back to the steel frame. The new building uses the historic façade as the main entry into The Penfield, with the apartment lobby and units on the upper levels being tied into the preserved piece.

The proximity to the interstate highway created an acoustical concern for the building, so the development team worked closely with an acoustical consultant, Veneklasen Associates, to create an upgraded sound mitigation system on the façades that would be in contact with the highway. The system features upgraded windows, upgraded exterior wall, and other sound-mitigating design details.

The City created a Request for Proposal (RFP) process establishing a selection committee that integrated the development team, the architect, and the neighborhood district council. The committee reviewed the submittal and selected two artist groups for the project.

Based upon the selection, the resulting design incorporates a community plaza and art park to further embed the development into the existing urban fabric. The plaza incorporates a 30-foot wide building setback on 10th Street featuring a rain garden, an interpretive display about the former Public Safety Building, and public art that includes “The Spirit of the Mississippi” statue, cut granite benches, corten steel lighted benches, and a corten light wall.

The City’s target demographic for this development was young professionals and well-established, affluent adults. To resonate with this audience, the design team envisioned upscale units with beautiful finishes, large windows, open floor plans, in-unit laundry, and stainless-steel appliances. Kitchens are open and feature granite countertops and kitchen islands, and many units have balconies. “The Penfield” name further accentuates and articulates the discerning, high-design standard of living in being derived from the finest carriage maker of St. Paul during the 1900s.

To further connect with the target demographic, a robust number of resort-style were integrated into the design, including: 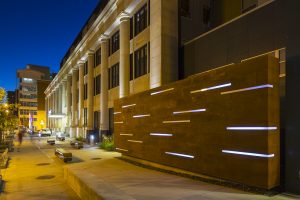 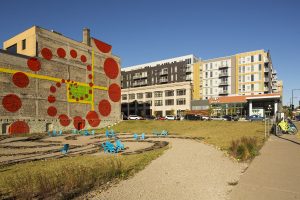 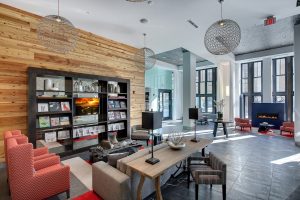 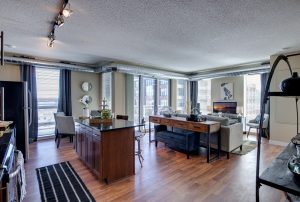 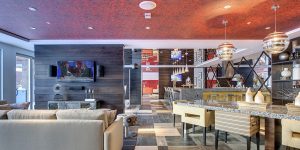 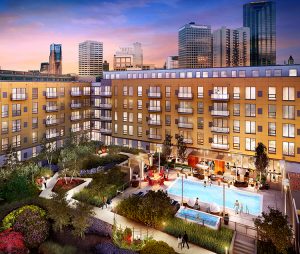