BKV Group was selected by the City of Lake Elmo to conduct a municipal facility study. The team toured the city hall/sheriffs office, the public works facility, and two fire stations, carefully documenting existing spaces and workflows while also making note of overdue maintenance, code concerns, ADA concerns, security concerns, health and safety concerns, operational inefficiencies, and projected end-of-service-life for each major building system. The team met with each department to discuss current and future space needs, and used demographic projections to plan for the long-term.

The costs to repair or replace each aging system in the existing facilities was noted, and potential intervention options were created to allow intelligent expansion and renovation of the Public Works and city hall buildings. The fire stations are not feasibly renovated, so options for replacement were explored, including tentative site plans for vacant parcels situated for optimal response times. Each master plan option was priced and a recommended implementation schedule was drafted with the city, accommodating financial realities and the relative urgency of the suggested interventions.

Comprehensive master plan with options for expansion, renovation, or replacement of municipal facilities 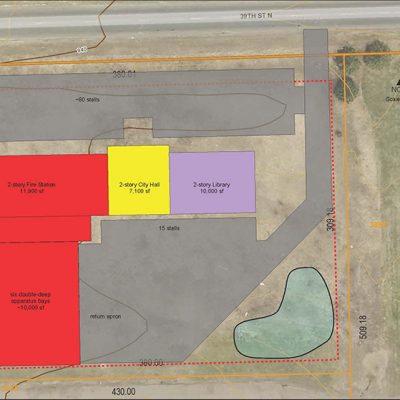